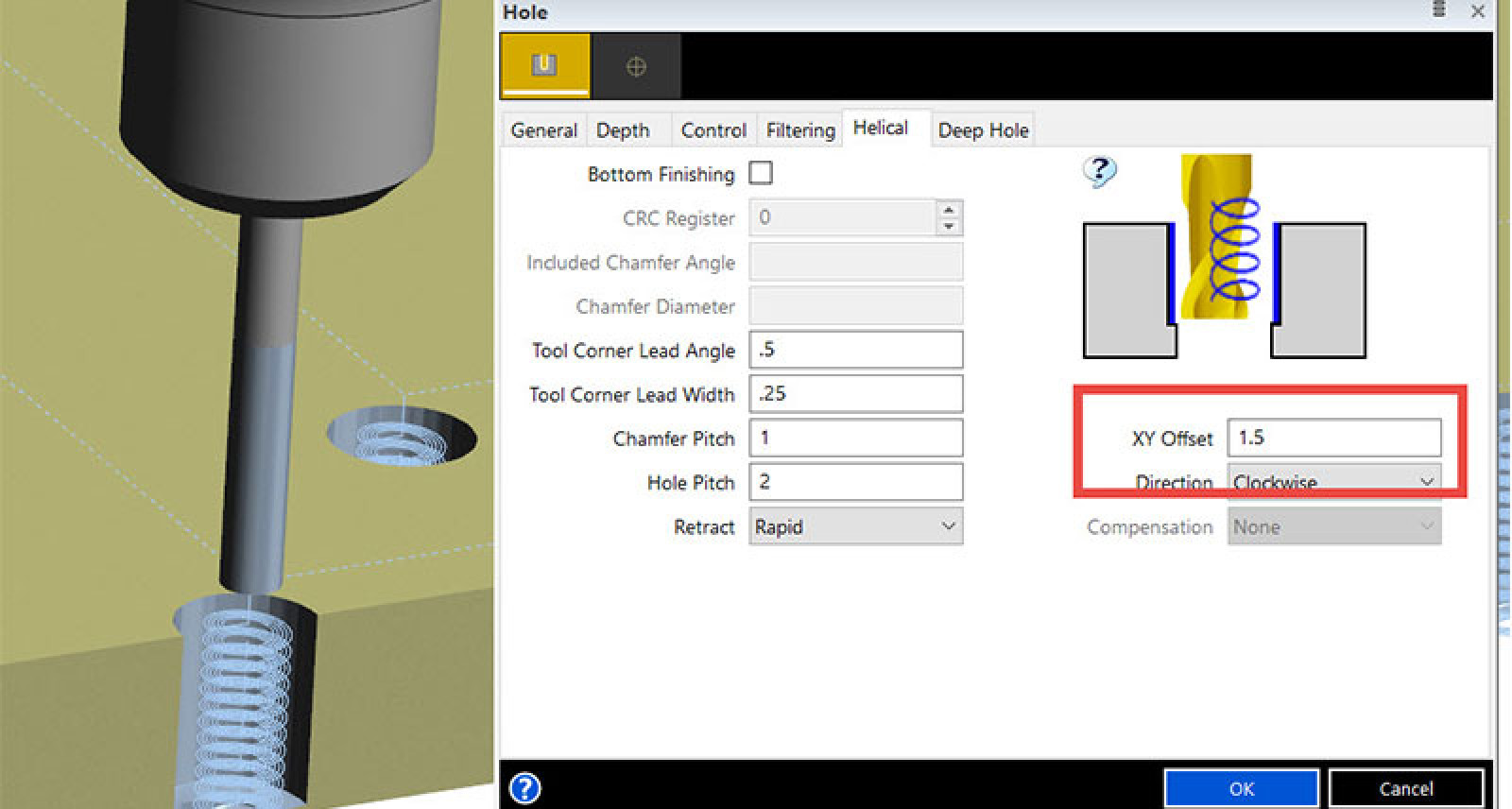 EDGECAM now Supports one of the Fastest 5-Axis Machining Tools

Member News
Software features Barrel Cutter Support, Performance Improvements and New Gun Drilling Cycle
The introduction of a specific 5-axis ‘Tilt’ control strategy, combined with a ‘Barrel Cutter,’ is said to be the most significant enhancement in the latest release of EDGECAM, from Hexagon Manufacturing Intelligence’s Production Software division.

Brand Manager John Buehler says barrel cutters are recognised as one of the fastest tools when 5-axis machining, and are now fully supported in the EDGECAM Toolstore.

As well as the new ‘side tilt by contact point’ capability, the Advanced 5-axis cycle also offers further gouge checking in the Swarf command, along with extra “ink” control in all strategies.

A number of new and enhanced features in EDGECAM 2020.0 provide increased productivity for both milling and turning users. And the recently introduced EDGECAM Inspect module includes 13 upgrades.

First…mindful of the need to generate quick toolpaths to reduce production costs, EDGECAM 2020.0 offers a significant performance boost when either roughing or profiling a solid model. “Essentially, the machining engine will only compute data constrained within the boundary, ignoring the rest of the model. This significantly decreases the cache size, while generating faster toolpaths.”

Formerly introduced in the Hole cycle in the 2018 R1 release, the ‘Deep Hole” strategy has been enhanced, justifying the creation of its own individual cycle. The original modifiers have been improved, and further control tabs have been added to the cycle, giving greater control over the toolpath.

The Turning environment offers a new machining cycle – Thread Profiling. “Reacting to a high frequency of enhancement requests from customers in this area, EDGECAM 2020.0 allows users to effortlessly machine complex form threads such as VAM and Acme,” says John Buehler. “The cycle provides both roughing and finishing strategies, allowing users to specify their own thread forms.”

The ever-popular Waveform Machining Strategy has been enhanced with ‘Chip Prevention’ control. Under certain conditions, a toolpath can generate a thin island of material (chip), which, as it gets thinner can cause machining stresses, and potentially break the tool.

“We’ve found that to compensate for this risk, users tend to sacrifice productivity by reducing feeds and speeds. So we’ve introduced the ‘Chip Prevention’ option which alters the toolpath pattern, by machining across the island of material, removing the possibility of machining stresses, allowing users to maintain optimum feeds and speeds.”

When using the Finish Grooving cycle, users can now control the ‘Break Edge’ angle. In previous EDGECAM releases, the break angle was set at 45-degrees.

In the Finish Turning cycle a ‘stand off’ value can now be defined when using ‘Up Cut’ control.

An XY Offset can be set when deploying the Hole Cycle’s ‘Helical’ strategy, allowing users to control both surface finish and tool wear. “It also leads to reduced CAD preparation time, while guaranteeing that the cycle is associative to the solid model.”

Two new tool types – Dovetail, and Double Angle – have been added to the Toolstore. This does away with the need to create custom graphics for them, saving time and programming costs. And the tools work automatically with the Slot Cycle.

Moving on to EDGECAM Inspect, Brand Manager for Research and Development Andy Mears says developers have responded to numerous customer requests by expanding the ability of Inspect components in both the Turning and Mill-Turn environments.

The overall interface has been upgraded to adopt the work-flow ribbon toolbar, improving interactivity. The ‘Probing Options’ menu has been split into two separate dialogs, meaning users can concentrate on Output and Inspect preferences individually.
Chat with us!

Welcome to our microsite, please tell us your name, company and email to chat with a member of the team.